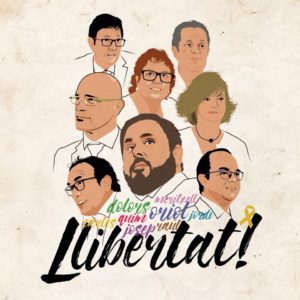 The Spanish judge Carmen Lamela Díaz has ordered the Catalan Vice-President Oriol Junqueras and 7 Catalan Ministers to be remanded without bail. They are to be held there until their trial while they are being investigated.

Raul and Oriol, I consider you to be my friends. We were colleagues as Members of the European Parliament. I was impressed by your determination Joquim, Dolors and Meritxell, when I met you in the press conference last Tuesday in Brussels.

Are we really prepared to jeopardize and throw away our European democracy? To squander our European values, our human rights for some misplaced loyalty to a neo-Francoist party? I call upon all democrats across Europe from all political families to act now!”

Judge Lamela has argued that those convicted could easily flee, destroy evidence, or “reoffend” (which in this context means to defend democracy). Thus, Judge Lamela has carried out the demands of the prosecutor’s office that had asked exactly what the judge has sentenced.

Not all ministers will be send to the Soto del Real prison, where the leaders of ANC and Òmnium have been held for the pat 17 days.

All of the accused are facing charges of rebellion, sedition, and mismanagement of public funds, and could face sentences of up to 30 years in prison.

President Puigdemont and the 12 dismissed ministers had been summoned to attend court today at 9h but only the above mentioned were present. President Puigdemont, Meritxell Serret, Clara Ponsatí, Lluís Puig and Toni Comín did not attend as they remain in Belgium where they have asked for the right to be heard via a videoconference.

In response to their absence, Judge Lamela has issued a European Arrest Warrant for those that did not attend today’s court hearing.